Australia as a continent hosts a unique range of wildlife but seems to be most famous for the group of mammals most often characterized by their pouches. Yes, it’s adorable to see baby marsupials, or joeys, peeking out of pouches, but there is an even more distinct group of animals on this continent that we seem to easily forget are fellow mammals. These are the monotremes – the egg laying mammals. Their most famous representative is the duck-billed platypus which truly was an enigma to scientists.

My first exposure to the existence of a duck-billed platypus was very likely through Zoobooks, but what I really remember was the one in my beanie baby collection. Her name was Patti and can best be described as a bright purple beanbag with a yellow duck-bill and webbed-ish feet. As an opportunity for representation in the stuffed animal world, this really was an insult to the magnificence that is a platypus — they forgot the beaver tail! After all this is one of the three physical features that made the scientific community first think it was a sown together hoax [1, 2]!

Given that the scientific community of 1799 was initially presented one single specimen of a duck-billed platypus, you really can’t blame them for thinking someone had found a wee beaver and sown on a spare duckbill they had lying in the taxidermy lab just so they could get credit for discovering a new species. As expeditions were made to collect and dissect more platypus specimens in order to analyze the anatomical features, scientists were left even more perplexed [1]. The fur covered body gave the first impression that this was a mammal, but there were also features found in birds and reptiles [1, 5]. Scientists would debate how to classify this animal for over ninety years, but, as anyone who has learned mammal identification knows, a good place to start an analysis is the skull [1, 2, 4].

Through analysis of anatomical features scientists would find classification clues but also be further perplexed. For example, despite the shape of the bill, analysis of the skull showed it was very different from the skull of a true duck. First,  the bill of a platypus  is covered in thick soft skin that is quite pliable with nostrils positioned at the tip of the bill [4, 5]. Additionally, the inside of the jaw contains modified keratin plates that continually grow and are used to grind food [2, 3, 4].

By dissecting specimens of the platypus and spiny anteater (now known as the echidna), 19th century scientists documented features that fueled the classification debate. In 1803 an important discovery was made for classifying these animals; they both have a cloaca – a common opening for the urinary, fecal, and digestive tracts – which lead to them being classified as the ‘monotremata’ in reference to this ‘one opening.’ We now know them as the monotremes [1, 5]. Further specimen analysis revealed mammary glands for milk production, although how nursing occurred would remain a mystery for several years. After much more debate and a “war of scientific publications”, the monotremes were certified mammals [1].

While the monotremes are closely related to both marsupial and placental mammals, they share several characteristics with reptiles  and birds – a mix of all worlds in such small bodies! Females have two ovaries but only the left ovary is functional (like birds) and reproductive tracts similar to reptiles for the development of the somewhat rubbery-shelled eggs that the young hatch from using an egg tooth [4, 5]. Once hatched, the mother nurses them with milk secreted from specialized patches of skin and fur [4].

Although the platypus has a streamlined body that is well suited for their semi-aquatic lifestyle, they have retained a couple reptilian skeletal features. Instead of having limbs arranged directly under their body (like most mammals), their limbs sprawl on either side which results in a more energy intensive reptilian gait when moving across land [4, 5, 6]. In order to limit the webbing on their feet from affecting their movement on land, the webbing on a platypus’ front feet retracts so that they walk on their knuckles [5, 6]. 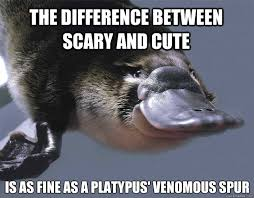 While the platypus features several reptilian characteristics, the most surprising is the venomous  spurs on the hind legs of males [2, 3, 4]. All platypuses develop a spur, but juvenile females lose the spur within 8-10 months of emerging from their burrow, resulting in a hollow pit [8, 9].  Some researchers have had the unpleasant experience of encountering this spur, but it is thought to primarily be used in combats for territory or access to breed with females [2, 3, 4]. This is because the venom gland only actively secretes venom compounds during the breeding season [3, 7]. While injectable venom is a characteristic we most often associate with reptiles, the platypus’ venom spur is not a feature retained from reptilian ancestors. Rather, it is an example of convergent evolution  – independent development of a trait in animals that are not closely related [7].

The platypus comes across as an evolutionary mash-up or leftover from an abandoned evolutionary pathway, but they are highly evolved for life in riparian ecosystems [10]. You may not think it when you look at that duck-billed face, but the platypus is technically a carnivore. This means they are filling the role that may come to mind when you think “top carnivore.” Yes, the platypus is in the same league as lions, tigers and bears. While many predators rely on their senses of smell and sight to locate prey, the platypus swims with its eyes closed and relies on the sensitivity of its large bill to find prey [4, 5, 12].

Studies of the platypus’ bill found the skin is covered in perforations that contain nerve endings; these receptors increase tactile sensitivity and can sense electric fields made when prey species contract their muscles [4, 12]. Platypuses also use their bill to turn rocks and shift sediment while searching for prey [10]. There is evidence platypuses can get a three dimensional “fix” on their prey by simultaneously processing the electrical and mechanical information the bill receives as they forage [12].

The platypus diet is a wide range of benthic aquatic invertebrates (i.e. worms, insects, crustaceans, immature bivalves muscles) and evidence of the occasional small fish or frog [10, 11, 13]. They can eat an average of 170.5g – roughly 6 ounces – in one day. For perspective, female and male platypuses range in size from 1.24 to 1.86g (or 2.7 to 4.1 pounds), respectively.  On average, they are consuming between 13 and 19% of their body weight each day – a large portion when you’re a small mammal [10, 13].

Consequently, this high consumption rate results in an impact to the abundance and composition of aquatic invertebrate communities. Predators, particularly in fresh water habitats, tend to have powerful effects on other aspects of the food web. Fish are often the top predators in aquatic systems, and platypuses share this role which results in strong direct and indirect effects on aspects of the aquatic ecosystem. Platypuses also physically impact aquatic habitats through their disruption of sediments while foraging. If the platypus went extinct, the structure of the invertebrate community would change resulting in impacts to the nutrient cycling and food web dynamics [10].

Although most sources I perused state something along the lines of “this animal has no commercial use, so we think its conservation status is probably fine,” it is easy to see how the classification of “common” or “species of least concern” could quickly change [4, 14]. We may no longer harvest platypuses for their fur, partially due to protective regulations, but there are human activities affecting platypuses and their habitats [14].

Population fragmentation, habitat  fragmentation, and degradation of  fresh water river and stream habitats are all affecting platypus distribution [11, 14, 15, 16]. Fishing lines, fish hooks, fishing nets, and crustacean traps in streams can tangle, entrap, injure and drown a platypus [3, 11, 16, 17]. However, a few mitigation methods are to limit litter in waterways and change crustacean trap design so that platypuses can escape [17]. Climate change is anticipated to change water availability and distribution of species. Semi-aquatic mammals could be at particular risk of losing habitat to human adaptation through water management and diversion projects. Warmer environments could impact platypuses as well because they are well structured to maintain a high body temperature and cannot tolerate ambient/water temperatures greater than 25C (77F) [14].

The unique collection of characteristics found in the platypus should encourage our bewilderment and make us want to protect such a unique member of the aquatic ecosystem. Studying the platypus will undoubtedly provide insights into evolutionary biology. Additionally, the platypus is probably the most well studied of the diverse, yet small, group of semi-aquatic mammals  (124 out of  the ~5,500 mammal species); these animals share similar habitats and ecological roles, so it is possible the platypus could be used as a template for developing conservation methods for the entire group [14]. This is a case where we should not only be aware and take action when a species is endangered. We should want to keep a common species common so that our ecosystems remain whole and healthy. By continuing to study and monitor this species along with limiting the impacts of pollution and fishing, we can work to conserve habitat for this one-of-a-kind predator in the land down under.

[1] Moyal, A. (2004). Platypus: the extraordinary story of how a curious creature baffled the world. JHU Press.

[16] Scott, A. C., & Grant, T. (1997). Impacts of water management in the Murray-Darling Basin on the platypus (Ornithorhynchus anatinus) and the water rat (Hydromys chrysogaster) (Vol. 26). Canberra: CSIRO Land and Water.